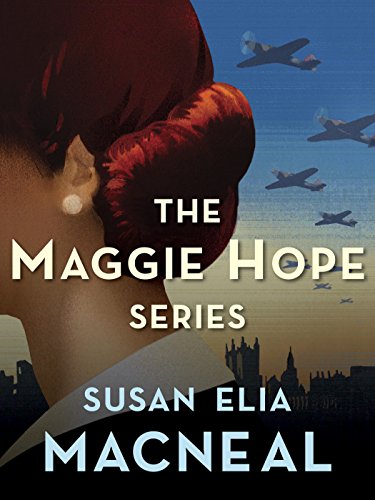 In January I was randomly looking for a new mystery series. What did I find? MAGGIE HOPE! I absolutely adore this series. Susan Elia MacNeal has written an incredible mystery series that takes place during World War II. I was so engrossed with these books, that I read all of them in about a month. So far, there are eight books in the series:

Why do I love this series and the character Maggie Hope? Well, let me tell you…

Who is Maggie? She is an American-born mathematician living in London during World War II. She finds a position as a secretary to known-other than Winston Churchill. From that she becomes a codebreaker and spy for the British government.

Ms. MacNeal has created a character with tremendous strengths and flaws. Maggie Hope is not a perfect character; however, she is incredibly intelligent and resilient. I appreciate having a strong female protagonist during World War II. Women during this time period seem to be portrayed more like Mrs. Miniver rather actual women who worked and sacrificed their lives for the cause. Maggie Hope represents those women who fought right along the men in the war.

I love that Maggie has an incredible intellect and she uses her brain in ways that shock the male dominated war effort. Sexual harassment was so prolific that it makes your stomach turn. Maggie is a great symbol for the MeToo movement during the 1940s. You can feel your frustration with the stupidity of the male sex. It’s, also, incredibly satisfying when a male character realizes and accepts her strength and intelligence.

In all of her books, Ms. MacNeal captures the dramatic events of World War II. Nobody is left untouched by the horrific events of the war. Maggie faces loss over and over. It is amazing that she is able to survive, mentally and physically. Ms. MacNeal has written her in a way that you can sympathize with her rather than just roll your eyes and think “this is just too much.” You continue to hope that Maggie pulls through each and every time.

If you are lookin for a new mystery series to get lost in, please pick up Maggie Hope. You will not be sorry.