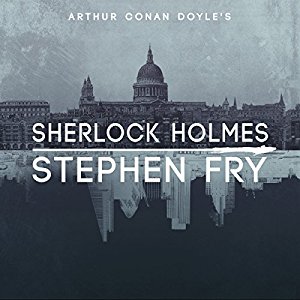 “…it was reading the Sherlock Holmes stories as a boy that first turned me on to the power of writing and storytelling.” (Stephen Fry)

Ever since he made his first appearance in A Study In Scarlet, Sherlock Holmes has enthralled and delighted millions of fans throughout the world. Now Audible is proud to present Arthur Conan Doyle’s Sherlock Holmes: The Definitive Collection, read by Stephen Fry. A lifelong fan of Doyle’s detective fiction, Fry has narrated the complete works of Sherlock Holmes – four novels and five collections of short stories. And, exclusively for Audible, Stephen has written and narrated nine insightful, intimate and deeply personal introductions to each title.

Stephen Fry is an English actor, screenwriter, author, playwright, journalist, comedian, television presenter, film director and all round national treasure. He is the acclaimed narrator of Douglas Adams’ The Hitchhiker’s Guide to the Galaxy and most recently recorded The Tales of Max Carrados for Audible Studios – a performance that earned Fry the accolade of “quite irresistible” from the Washington Post. Stephen has contributed columns and articles to newspapers and magazines, appears frequently on radio and has written four novels and three volumes of autobiography.

I started listening to Sherlock Holmes on May 11, 2017 and finally finished on August 28, 2017. It was 63 hours of amazing story-telling. Stephen Fry’s narration made the listening experience well worth the 65 hours. His characters all had distinct accents, voices and personalities. His story-telling seemed effortless. He captured Sherlock’s abilities plus his incredible arrogance.

I found that Sherlock Holmes is not a likeable person. His arrogance was very annoying to me. I felt he treated his friend, Dr. Holmes, almost as a servant. I know there has been A LOT of analysis on the Holmes/Watson relationship. In my opinion, Holmes is a self-absorbed arrogance bastard. However, his mind is insanely astute and perspective. I wonder if Arthur Conan Doyle’s mind works the same way. If he could write about Holmes’ incredible mind, Doyle had to share many of Holmes’ characteristics. I don’t know, just a thought.

It amazed me how many stories Doyle wrote. He was a very prolific writer and his stories are all very captivating. It was not difficult to listen to 63 hours of Sherlock Holmes. Maybe it was the voice of Stephen Fry or maybe the stories. Well let’s just say it’s both.

Now what is my favorite story? It’s the Valley of Fear. It was the last of the four Sherlock novels. Professor Moriarty has a presence and it always causes Holmes’ hackles to rise. No one believes, except Holmes, that Moriarty is such a master criminal. I really enjoyed this novel due to the fact of some incredible twists and turns that I didn’t see coming. Quite of bit of the story occurred in America which is very different from Doyle’s other stories. Doyle structure of The Valley of Fear made for a thrilling read. The second part took the reader back in time to explain and wrap up the first part.

If you have never tried Sherlock Holmes due to the large number of stories, I recommend trying this audiobook. Stephen Fry is a Sherlock expert and his voice takes deep into the stories where you can definitely get lost.