Kitchen Confidential: Adventures in the Culinary Underbelly
Written by Anthony Bourdain
Published in 2000 by Ecco/Harper Perennial 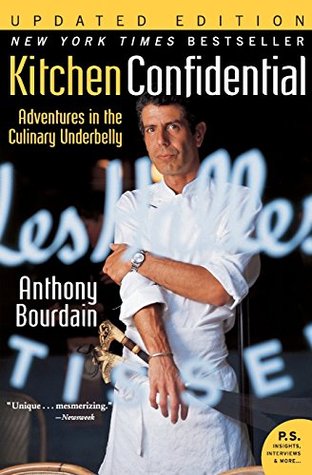 A deliciously funny, delectably shocking banquet of wild-but-true tales of life in the culinary trade from Chef Anthony Bourdain, laying out his more than a quarter-century of drugs, sex, and haute cuisine—now with all-new, never-before-published material.

I decided to read Kitchen Confidential right after the death of Anthony Bourdain. His suicide came as such a shock to most people. He was such a unique character in the culinary and journalistic world. His ability to listen to people’s stories while breaking bread seemed to unveil some many thoughts and feelings. He showed us that we are all not that different. We talk, we eat, we commune. Now to the book…

I have given this book three stars due to my getting mired down in all the cooking terminology. It weighed me down a bit. However, the stories he told would make me laugh out loud which I love doing since people give you really funny looks. I loved his honesty. He didn’t leave anything on the table. The grossness, sexism, harassment, drugs, etc was all out for the public to witness. I was shocked but at the same time I wasn’t shocked. You know what I mean?

One of the last chapters in this book was when he went to Tokyo for the first time. I was surprised that was his first time so really venture out on his own. I like how he revealed his nervousness and a little fear trying to places and food. After seeing so many episodes of No Reservations and Parts Unknown, I was hard to believe that he wasn’t naturally drawn to new experiences.  He had to step out into the unknown with a shaky foot. I really like that.

I loved the stories. I loved New York. I loved the food. But I had a hard time understanding all the jargon but, truthfully, this book wasn’t written for someone like me. He wrote it for his cooks, runners, dishwashers; those he respected and loved. He wanted the world to know the importance of everyone in a kitchen.